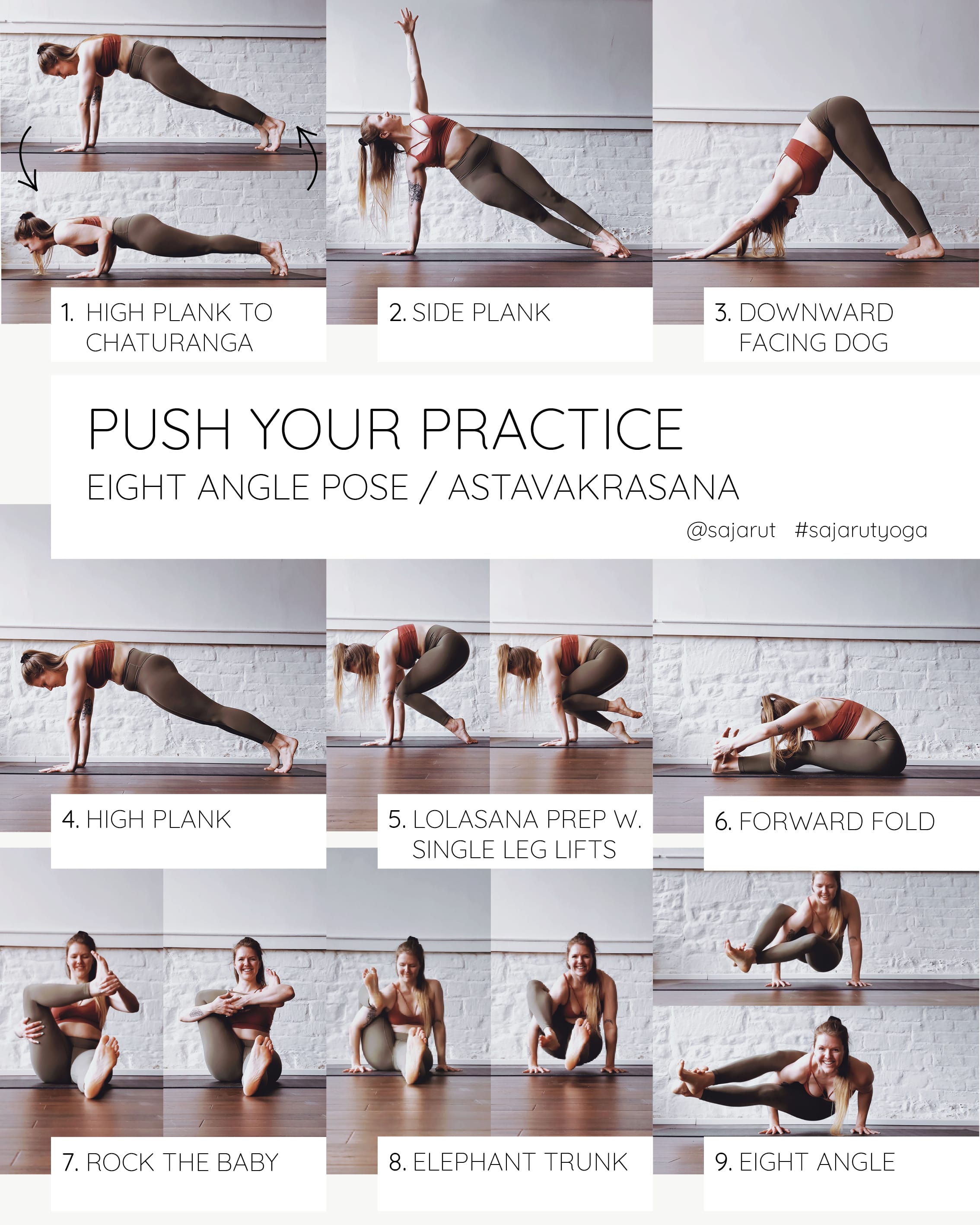 Welcome back to another round of Push Your Practice! This time around we’re working our way to Eight Angle Pose, or Astavakrasana.

This is one of those arm balances that looks a hell of a lot trickier than it really is. Don’t get me wrong, I’m not saying it’s a walk in the park, but definitely don’t be discouraged by all the crazy angles! It’s definitely worth playing around with as it is a surprisingly accessible arm balance that builds lots of strength in the upper body and core.

This sequence will not only help you build the arm, core and shoulder strength to fly off in your Eight Angle Pose but it will also stretch out and prepare the hamstrings. Before starting the sequence make sure that you’re nice and warm by warming up the wrists and doing a few rounds of Sun Salutations, or insert the sequence somewhere in your practice, when you’re warm but not too tired 😉

Eight Angle Pose requires a fair amount of arm, core and shoulder strength and since the arm position in Eight Angle Pose is basically Chaturanga arms, it makes sense to start there right?

How to: Start out in plank pose, which will fire up the core and shoulders. Take a deep inhale to prepare, lifting the space between the shoulder blades. Exhale to slowly lower down, shifting the weight slightly forward and keeping the elbows hugged in. Try to keep the space between the shoulder blades lifted as you lower down, only go as far down as you can keep that engagement. Inhale to press it all the way back up into your plank. Repeat 3 – 5 times.

Modification: Lower the knees to the mat rather than compromising technique 😉

Eight Angle Pose requires strength throughout the whole trunk of the body, including the side body. Enter Side Plank!

How to: From your High Plank, start to slowly shift the weight into the outer edge of the right foot and over into the right hand. Inhale to slowly reach the left hand up into the air. Make sure that you’re really pressing up and away from the floor, finding space in the right shoulder joint and broadening across the chest. Keep the hips high and both sides of the body long. Hold for 3 – 5 breaths before moving onto the other side.

Modification: Lower the bottom knee to the mat to modify.

Stretching out the hamstrings is going to help the body prepare to extend the legs out in your Eight Angle Pose. Downward Facing Dog is a great way to both stretch the back of the body and strengthen the upper body.

Modifications: Bend the knees rather than letting the upper body round. If the wrists feel a bit sore, lower down onto the forearms.

Again, Eight Angle Pose requires a hell of a lot of core strength and when it comes to core strengthening, nothing really beats a good plank!

How to: Firmly press the ground away, spread the shoulder blades wide and hug the ribs in. Keep the weight forward as much as possible. Hold for 3 – 5 breaths.

Modifications: If the upper body isn’t feeling very stable, try lowering the knees to the mat. If the wrists feel a bit sore, try holding a forearm plank (knees can be on or off the mat).

Get ready for even more arm, core and shoulder fire with these Lolasana Prep leg lifts.

How to: From your high plank, step the legs in with the tops of the feet on the mat. Keep pressing up and away from the floor, hugging the upper arms in, spreading the shoulder blades wide and the ribs drawing in. Keep the upper body strong and stable as you slowly lift one leg off, try to hold for 3 breaths before switching.

Modifications: Try holding for just a breath on each leg to start with. Or lower down onto the knees before switching legs.

Stretch out the hamstrings even further with a classic Seated Forward Fold.

How to: Plant the sit bones firmly on the mat and stretch the heels forward. Inhale to elongate the spine, pressing the sit bones down. Exhale to slowly shift the chest forward, reaching the hands for the shins or feet. Keep the back elongated and the shoulders relaxed, moving the heart forward towards the toes. Hold for 5 breaths.

Modifications: If you can’t quite reach the feet yet, try bending the knees rather than rounding the back.

Loosen up the hips, glutes and hamstrings with Rock the Baby (this pose name always makes me laugh!).

How to: Sitting up nice and straight with the sit bones firmly planted, bend the knee to bring the leg in towards the chest (starting with the right). Grab a hold of the foot with the opposite hand and bring the shin as parallel with the floor as possible. If this feels comfortable, bring the foot into the upper arm, hugging the leg in close. Whether the foot is on the upper arm or not, gently move the leg back and forth as if rocking a baby (a pretty little leg baby) for 5 breaths.

Move straight from Rock the Baby to Elephant Trunk to Eight Angle, before switching sides.

This is one of my favourite ways to prep for Eight Angle Pose. It’s great for getting the body used carrying the weight in the upper body and the hips lifting off the mat.

How to: From Rocking the Baby, thread the arm underneath the leg (starting with the right), try to get the leg as high up on the arm as possible. Plant the hands firmly on either side of the hips and press up and away from the floor, at the same time lift the hips up and draw them back slightly. Keep the shoulder blades spread wide and hug the ribs in. Hold for 3 – 5 breaths.

Move straight from Elephant Trunk to Eight Angle Pose before doing the other side.

Last but not least, with your body all prepped and ready to go, it’s time to tackle Eight Angle Pose! Again, it looks more complicated than it is but remember to have a sense of humour here, there might be a face plant or three before you nail it 😉

How to: Keep the leg high up on the arm from your Elephant Trunk Pose (you can lower the hips back down to the mat – or if you’re up for a challenge try keeping them lifted 😉 ). Hook the bottom foot around the ankle of top foot. Lift the hips back off the mat, hugging the ribs in. Start to slowly tip the shoulder forwards and bend the elbows, whilst at the same time extending the legs out to the side. Hold for 3 – 5 breaths.

Take a breather and then start Rock the Baby on the other side, moving through Elephant Trunk and then finally Eight Angle.

Don’t get discouraged if you don’t lift off on the first try. It may be a cliché but it’s not so much about the pose itself, it’s about what we learn along the way 🙂

If you have any requests for the next tutorial in the Push Your Practice series then let me know in the comments below.

Use #PushYourPractice to share your progress over on IG, and remember to come say hi over on @sajarut.

Also, if this got you in a real arm balance mood then why not give the Crow tutorial ago too 😉

Sign up to the newsletter to keep up to date with all the latest!

Until next time! Sx

Headstand Flow – A few yoga poses to get you upside down!

Hips & Hamstrings – A short flow to loosen up the lower body